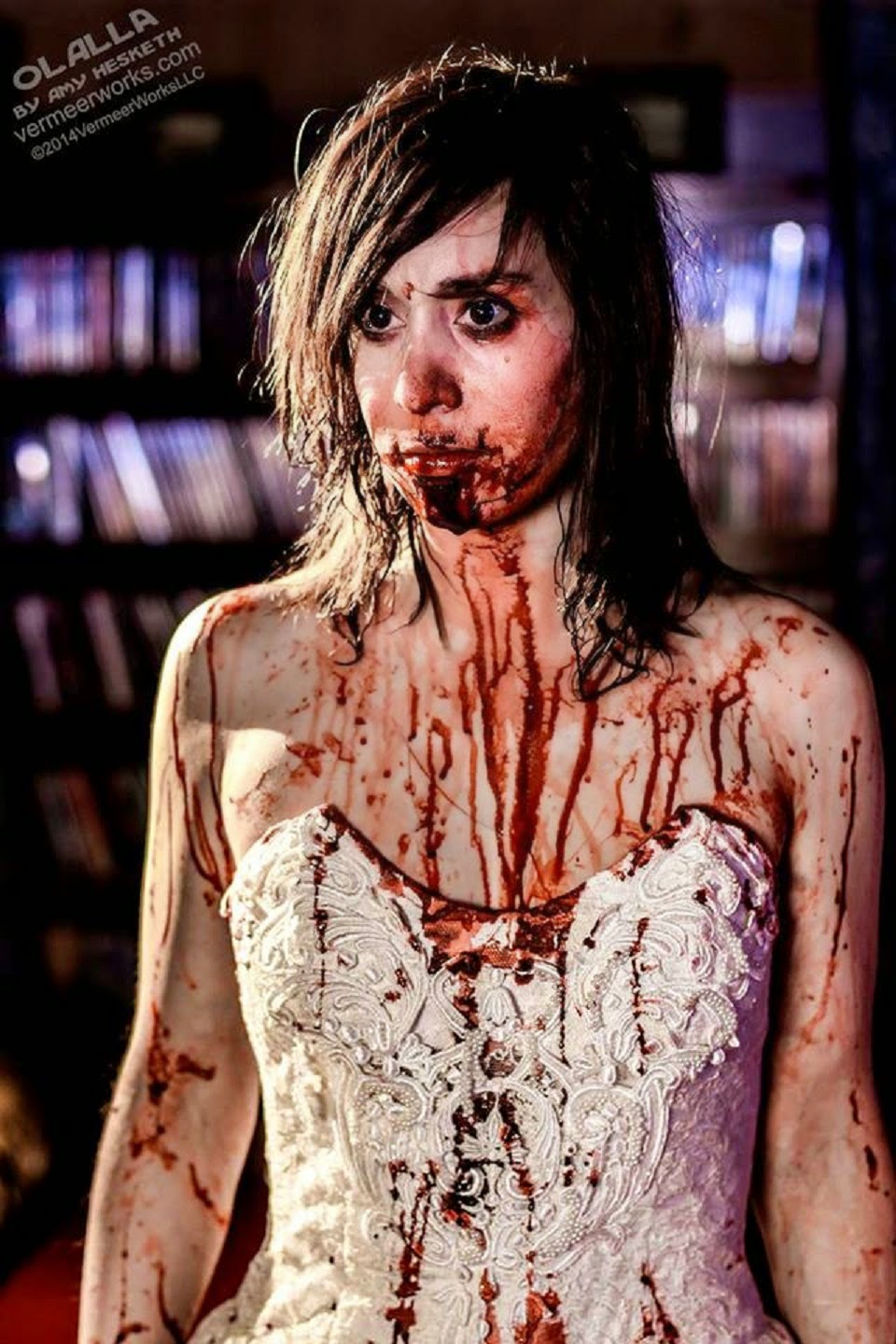 Amy Hesketh’s OLALLA would have become a favorite film of mine even without the Vampires. And I know my female Vampires.

DRACULA’S DAUGHTER was my first (Vampire film). She seduced me when I was a kid, did it right there in my house with mom and dad sleeping in the next room and me sneaking a look at the late late show on TV. My next, one BLACK SUNDAY evening, in the balcony of an old Fox Movie Palace, was Princess Asa of the royal Moldavian House of Vaida. Asa, played by the ferociously beautiful Barbara Steele, changed my outlook on life (and Witches and the Undead). Then there was BLOOD AND ROSES, DAUGHTERS OF DARKNESS, REQUIEM FOR A VAMPIRE, TWINS OF EVIL, THE VAMPIRE LOVERS, LUST FOR A VAMPIRE, COUNTESS DRACULA, LA COMTESSE NOIR, VAMP, ONCE BITTEN, QUEEN OF THE DAMNED, and Jac Avila’s recent macabre masterpiece, DEAD BUT DREAMING. The point is, my long list of Famous Female Vampires of Film-dom is extensive and could be continued, on and on.

But Olalla is a Vampire like no other, and OLALLA is a Vampire film like no other. The movie thumbs its nose at almost every establishment Vampire tradition. No Danse Macabre for these Vampires. No. But there is Mambo! No sucking of blood from neat little puncture wounds on the throat. But there is chilled blood in the fridge sipped from fine crystal. Or, if you’re Olalla, the black sheep of the clan, you occasionally do it the old fashioned way, rip out the throats of your victims, and leave a bloody mess. Not good, in a family determined, for good reasons, to avoid attracting attention.

You don’t have to be a non-conformist Vampire to identify with Olalla. Are your tastes in clothing styles a little unusual? Does your career choice garner disdain and disapproval? Have you discovered your sexual preferences violate some arbitrary definition of “normal?” How about your taste in music? Art? Books. Videos? Food? Hobbies? Whatever? There’s a little Olalla in all of us.

With its roots in a story by Robert Louis Stevenson (the guy who wrote “Dr. Jekyll and Mr. Hyde”), Olalla is portrayed with a sly undercurrent of self-deceptive innocence by Hesketh herself. She yearns to be an ordinary woman and go shopping, but she does not have “ordinary” in, umm, well, in her blood. She tries but cannot long stand to pretend, like the rest of her family does, not even after the repeated encouragements of a skillfully applied riding crop, wielded by the family’s dedicated enforcer, Felipe, played with exquisite intensity by Jac Avila (hard-ass to the max, but with Olalla’s best interests seething in his Vampire-heart). Tough love, thy name is Felipe.

Felipe is convincingly and sympathetically portrayed in flashbacks as Avila’s younger self by Alejandro Loayza. He has worried about Olalla’s well-being, and that of his family, since childhood (in OLALLA,  Vampires age, but slowly). Felipe’s sense of responsibility for his family’s well being is a heavy burden, especially considering what happened to Olalla’s mother (played in heart-wrenching flashbacks by Hesketh, too).

Let me tell you, I was pulling for mom and could hardly stand to watch her ending. Yes, Hesketh, both as actor and director, is so good that she did a number on jaded horror movie watcher me. Not that I’m complaining, but no one deserves to die that way (though thousands, maybe millions have, over the centuries), especially not a good-hearted mother, Vampire or not! It’s those damned villagers with their pointed sticks! And torches. Superstitious fools! 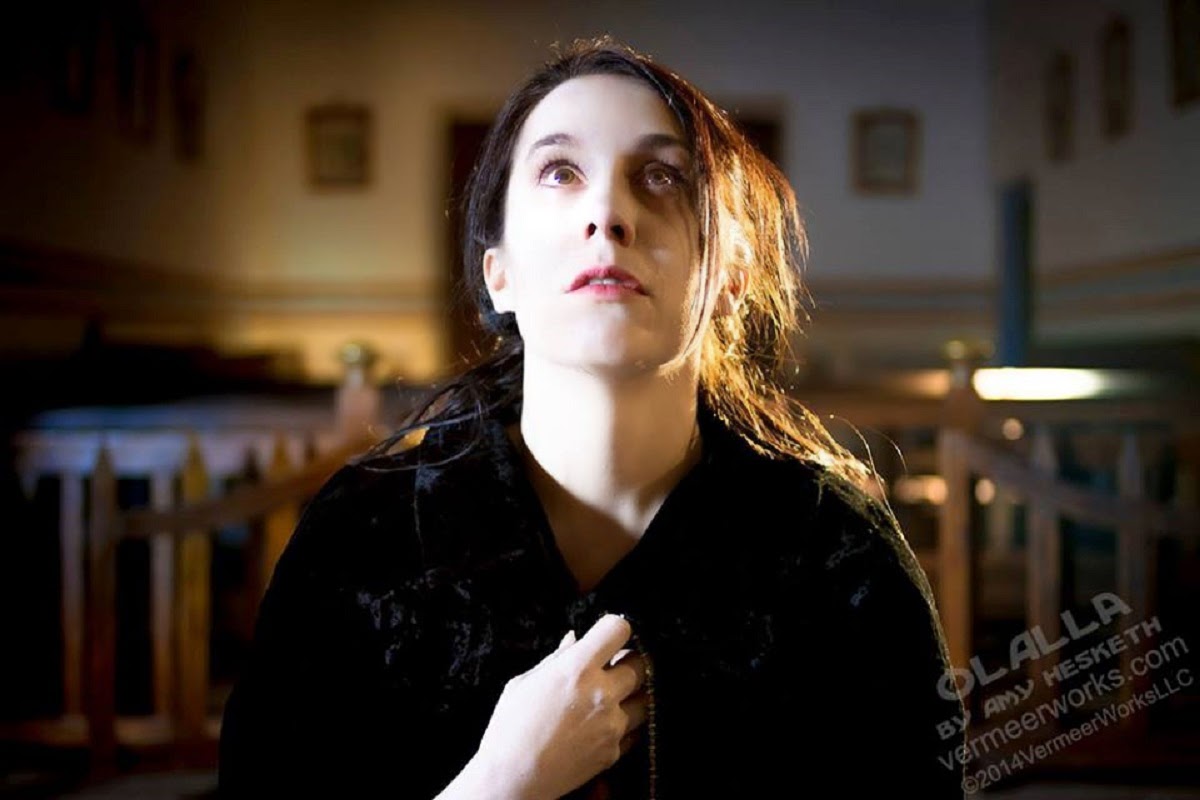 And how dare the leader, played with suitably manic enthusiasm by Eric Calancha, whip her so much? Sure, his fear makes him merciless, but over and over his whip marks her flesh…until, hey! That’s enough! Well, maybe just one more…but no one looks away! No one averts their eyes, not even me, from her pain and her shame as the flames rise higher and her screams grow more frantic. And the heartbreaking, heroic way she tries to endure it and accept it then gives up and starts desperately wrenching on her ropes. Won’t anyone show her some mercy? Won’t someone cut her loose in time? Oh! The flames! They’re coming from her now! It’s too late! But meanwhile, back in the present day—

Olalla’s sister, Ofelia, cares about the family, too, and is fed up with her sister’s antics, endangering them all. Ofelia remembers all too well what happened to their mother. Mila Joya plays Ofelia as a playfully seductive predator, with a subtle undercurrent that made me wonder just how many throats she herself had ripped out, in secret, without telling anyone, and never getting caught.

But then there are the ordinary men who fall in love with the extraordinary Olalla and her mom. Luis Almanza’s Nathan and Cristian Del Rio’s Roberto cannot resist! Moths to the flames! The way those characters were played made me identify with them, worshipping each their own version of la belle dame sans merci, because maybe, just maybe, Hesketh herself will be merciful, maybe this time, love will find a way, maybe she’s not la belle director sans merci…yeah, right!

She has no mercy on her audience when it comes to creating other unforgettable characters, either. If the two uncles, played in fascinating synchronicity by Beto Lopez and Fermin Nuñez don’t steal the show, Erix Antoine’s Bruno does. The aunt, Maria Esther Arteaga, is a blessedly calm center of respectability, but what can she do amid all the rest? Is this old and rather decadent, in a dignified way, family doomed? Well, maybe not! After all, who among us can deny that Beto’s extended, unhurried, detailed explanation of what a “muffin” is and is not is alone worth its weight in butter running down your chin and, in my opinion, gives this family all the socially redeeming value they need to justify their continued existence.

Bottom line, having been dominated by females (Vampire-films-wise), I have been waiting for OLALLA most of my life. But thanks to Amy Hesketh, its award-winning writer, director, star, and to Jac Avila and all the rest at Pachamama Films, none of us have to wait any longer. Three cheers and all the first magnitude stars in a star atlas for OLALLA! Just don’t watch NOSFERATU with her, okay? But if you do, at least do not talk through the film in an attempt to impress her with how well-versed you are in NOSFERATU film-lore. It’s not a good idea. Believe me. You’ll be sorry…heh heh heh...Hesketh! 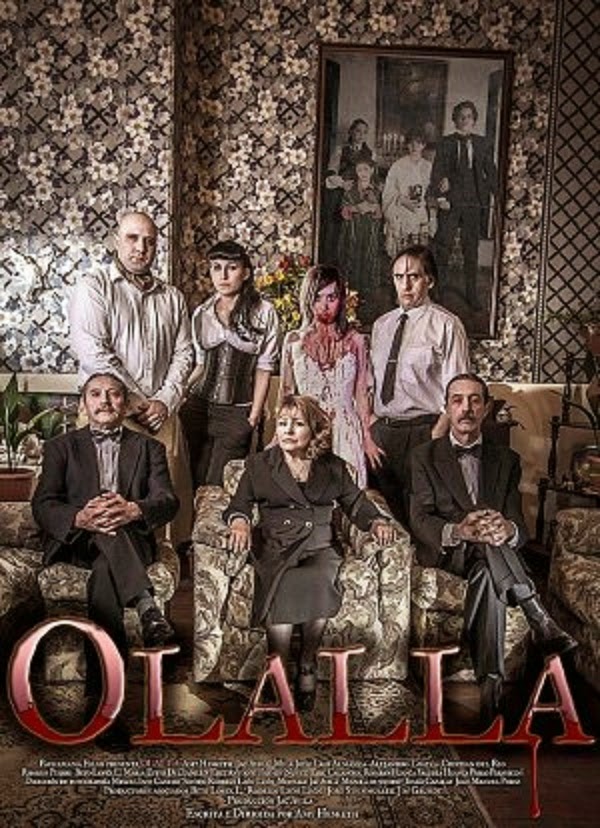 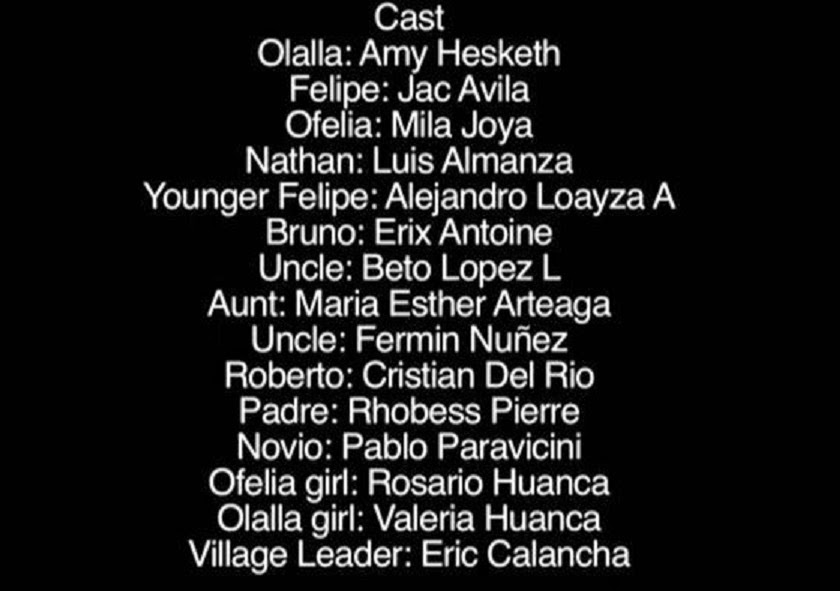